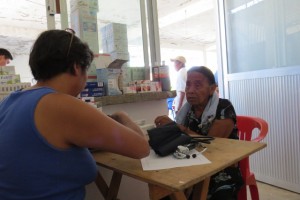 *A medical brigade, organized by CODIGO DH, visited the community to provide medical attention and to document the situation of the chikungunya fever.

A medical brigade, consisting of two physicians and with the help of a health promotor and two nursing students provided medical attention to the community on the 4 and 5 of July 2015. This action was realized due to the request of the organization Mungier Ndyuck A.C (“defenders of the sea”), which has observed the proliferation of the chikungunya fever and the lack of attention to this problem by the responsible authorities in the health sector, although San Dionisio de Mar has a medical centre, which ran out of medicine. During that time, there were only two fumigations, one on May 25 and the other one just the day before the visit of the medical brigade.

The Chikungunya fever is transmitted to humans by the Aedes aegypti mosquito and is characterized by high fever and severe joint pain. In most cases people start to feel better after a few days, but other people can develop a cronical joint pain. In San Dionisio del Mar it is assumed that the fever has caused two cases of deaths of older people.

Some data about the visit:

San Dionisio del Mar has serious health issues as we have seen in the preceding data: In total 69% of all cases are linked to CHIKV, which represents 60 people. According to the handbook of the Ministry of Public Health of the Dominican Republic, “in a percentage of cases, arthralgia can become chronic. A situation that requires an appropriate health-service response. There is no specific antiviral drug treatment for chikungunya nor a commercial chikungunya vaccine. Therefore health-services shall ensure symptomatic treatment of the affected people and the recognition of atypical and severe forms of this disease.”

Codigo DH and Mungier Ndyuck A.C are very concerned about the proliferation of the chikungunya virus in the Isthmus of Tehuantepec, as well as the lack of diagnosis, adequate treatment and drugs in the clinics and health centres. San Dionisio del Mar, with its 5098 inhabitants according to figures from INEGI, could suffer new outbreaks of the disease in the rainy season which also could affect the rest of the population.

Additionally, the medical care by the local health clinic has been inadequate. Some people reported that the during the medical consultation in the local health centre they were told “to go and wash themselves and nothing will happen to them”. Because of that they went to private practitioners – paying high costs.

It is worth mentioning that the figures the Sanitary Jurisdiction of the Isthmus of Tehuantepec has published are much lower than the situation we observed. There were 180 cases confirmed by the Public Health Laboratory of Oaxaca in the region until week 20 (Reference: El Imparcial, June 13).

The lag in the diagnosis could affect severely the quality of life of the population, especially in remote communities, like for example in the Ikoots area in the Isthmus of Tehuantepec, where in addition to the situation of poverty and social marginalization and political conflicts due to the presence of foreign wind power companies since 2012 now there is a serious public health problem.

We urge the public health sector to strengthen its efforts to attend the affected communities in accordance with the standards established by the WHO and PHO for the clinical management of these cases, to ensure that clinics have essential medicines and supplies and to launch preventive actions which involve different sectors in the areas exposed to the virus of Chikungunya.