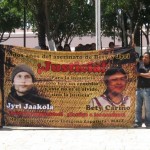 On April 27, 2010, Bety Cariño and Jyri Jaakkola, of Finnish nationality, were murdered on their way to San Juan Copala as part of a humanitarian caravan. They were on an observatory human rights mission to learn about the reality of living conditions in said county, which for five months had been besieged by UBISORT (acronym for Social Welfare Unit for the Triqui Region). The events occured in the uppermost region of La Sabana, Copala.

Three years after these lamentable events, impunity reigns. The efforts of the federal and state authorities to find the perpetrators and masterminds of these events has been seriously lacking. While there have been some attempts, but so far no one has been punished for these crimes. And even though arrest warrants have been issued, they have not been executed. Recall that Betty – who was a teacher by profession and human rights defender by vocation – dedicated her life to supporting Mixtec and Triqui communities, to creating alternative economies and communication, and to defending the territory and resisting mines. Her leadership and commitment led her to be part of several movements at the national and international levels. Jyri Jakkola, meanwhile, was a renowned environmentalist and activist, focussing on the reality of indigenous communities in southern Mexico. He worked in the organization Estelle Uusi Tuuli (New Wind), dedicated to promoting international solidarity, fair trade, and peace and understanding among peoples.

Both shared a hope for change and worked on building alternatives and experiences that helped to create a different world. Betty said, and we with her: “We sow the future to harvest hope.”

Given the above, CODIGO DH demands:

1.  No more impunity in the case of Bety Cariño y Jyri Jakkola, punishment for those responsible – both intellectually and materially – for their murders.

2.  Effective protection and respect for the for the work of human rights defenders who risk their lives throughout Oaxaca and Mexico, who fight for better iving conditions and defend the rights of their people and communities.