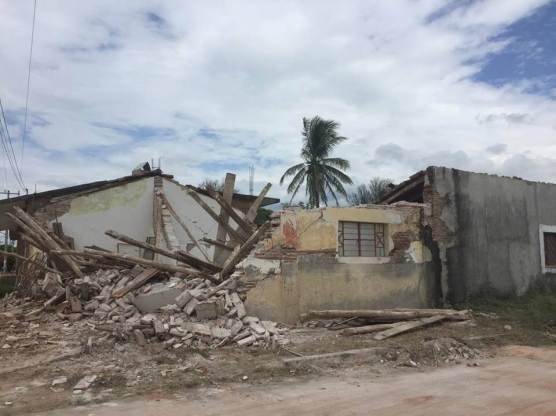 Five months after the earthquakes of September 2017, the situation in the Isthmus of Tehuantepec hasn’t improved much. Due to insufficient state relief, about twenty thousand people still live on the street. These families don’t appear in any census carried out by the Secretariat for Agrarian, Land and Urban Development (SEDATU) and therefore can’t receive any official relief to rebuild their houses in the near future.

In its first report, the Special Commission for the supervision of the reconstruction in Oaxaca (Comisión Especial de Seguimiento a la Reconstrucción de Oaxaca) indicates that the majority of these victims not only fail to appear in the census, but also haven’t received any visit by local or federal authorities. For this reason, the Commission as well as the victims themselves call for a second census in the near future.

Moreover even families who are eligible for state aid to rebuild their homes have to deal with various issues. One of them is the cloning of chip cards that contain the money for construction materials which means the cards are of no use for the victims. Furthermore families with totally destroyed houses still receive bills by the Federal Commission for Electricity (CFE) even though it’s obvious that they haven’t used any electricity in the past months.

The reconstruction of buildings is also slowed down by a lack of construction workers as well as a shortage of and an increase of prices for construction materials. The latter leads to the fact that the money provided to victims by the government doesn’t suffice to rebuild or repair their homes.

Not only are many families still dealing with the fallout from the September 7th earthquake, public institutions like hospitals and schools haven’t recovered either.

Thousands of students in the Isthmus have yet to resume classes because damaged school buildings remain unrepaired. For this reason, students and teachers protested by holding their classes in the streets of Juchitán on the 22th of January. With this action, they demanded attention for the conditions of their schools and wanted to put pressure on the government to speed up the rebuilding effort.

The school supervisor of the 056 zone in Juchitán Wilber Matus Martínez said all of the 19 public schools in his district deserve the same amount of attention but to him it seems like the government categorizes students into different priority levels.

The public officer of the State Institute for Public Education in Oaxaca Francisco Ángel Villarreal believes that there is no reason for students and teachers to protest as the government has provided enough aid for schools to rent alternative spaces to hold classes while the reconstruction of school buildings is still in progress.

In contrast to public announcements which state that the reconstruction in all areas is advancing as predicted and will be finished soon, many families, students and teachers still haven’t gotten the chance to get back to their former day-to-day life and can’t expect this fact to change in the near future.