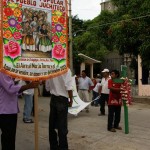 *Juchitán remembers the battle of September 5, 1866, in which the Zapotecs defeated the imperial army during the french intervention.

*Today history repeats itself and the defense of their ground and territory continues.

For the people of Juchitan and the people of the Isthmus now facing an “invasion” of foreign investment to build more than 15 wind parks in the area, September 5 is of particular relevance. For the people of Juchitán, organised in the Popular Assambly of the People of Juchiteco (Asamblea Popular del Pueblo Juchiteco, APPJ) had begun a process of reconstruction of historical memory from defending their territory since last year; for them it is a date they remember as a day of fighting for the defense of their territory against foreign invasion which continues today in defense of the commons against the dispossessions of Gas Natural Fenosa which has built its wind park Bií Hioxho exactly where the battle was won in 1866.

The reconstruction of memory has been accompanied by the constant recognition of the role of women in the history or their people: Petrona Esteva TONA TAATI, Rosalía and Simona Robles, Paulina Vásquez and María Tachu, among others, who were not just relevant because of their “traditional role as women” healing the wounded and feeding the army, but for their participation in the battle. They all represent the union of the people of the Istmo, San Blas Atempa, Asunción Ixtaltepec, Chicapa de Castro, Unión Hidalgo, Zanatepec, Niltepec, Ixtepec, El Espinal and other surrounding towns, as well as people from Chiapas; they only could defeat the invasive army by fighting together.

Hence the relevance of remembering the battle of September 5, not only for the people of Juchitán, organised in the APPJ, but for all the people of the Istmo, who have been integrated into the national political and economical life because of the huge importance of the Istmo of Tehuantepec and subsequently the Port of Salina Cruz. Unfortunately, decisions on the use of territory have remained in the hands of the ruling political class and have been imposed upon the life of the people.

The struggle of the indigenous people of the Istmo took place, on more than one occasion, because of the respect of their “autonomy” which has meant different things at different times of the history and which they had to defend in many different ways. Today the people face a struggle against the foreign investments which, as part of a national development project, means a second period of constructing wind farms in the region.

Like they fought against the French on September 5, the people of Juchitán and other people of the Istmo continue fighting for the defense of their territory against the dispossessions they face today by the wind companies. With the same courage and the same confidence that they can manage to even beat the most powerful army in the world , if they just fight together.