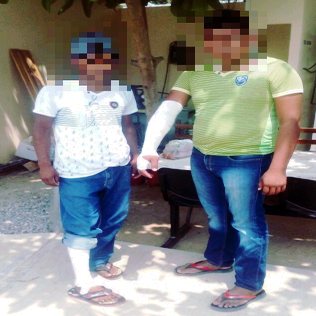 On the 29th of March, five people were shot during religious celebrations in San Dionisio del Mar. The ceremony held on the Thursday before Easter has been a tradition for many years but this time an armed attack brought it to an abrupt stop.

Luis Daniel A.M. (16 years old) José de Jesús G.R. (18), Osvaldo T.E. (19), Daniel R.M. (38 años) and Teodosio G.G. (43) were wounded in the attack.  They were treated in a hospital in Juchitán de Zaragoza afterwards but the therapy as well as the medical information given weren’t satisfying. The hospital still isn’t working properly as its building was damaged during the earthquakes in September 2017 and is still operating in a shelter.

This armed attack wasn’t the first that occurred in San Dionisio del Mar. In December 2014 one person was shot there as well. Both incidents happened during a electoral process in the town in the Istmo de Tehuantepec. In 2014, voting was canceled.

The political situation in the town has been tense for six years now. In 2012 the Popular Assembly of San Dionisio del Mar (Asamblea de Pueblos de San Dionisio del Mar) began the occupation of the city hall which continues to this day. While there didn’t exist a official political authority for the first few years since 2012, on the first of January 2017 Teresita de Jesús Luis Ojeda was appointed mayor without official elections.

This year elections will take place in San Dionisio del Mar and Luis Ojeda is one of the candidates. San Dionisio del Mar has been resisting a planned industrial-scale wind park close to the town for many years. While the company Mareña Renovables has canceled their project, there are still many other multinational energy firms that want to build wind farms in the Istmo de Tehuantepec were the conditions for this kind of energy production are favorable.

An example for this is the case of the indigenous community Unión Hidalgo where farmers fight against a consultation about a wind park by Eólica de Francia (EDF) because in their opinion the current electoral progress and the still on-going reconstruction after the earthquakes, which destroyed big parts of the town, make it impossible for the residents to deal with the topic at the moment.