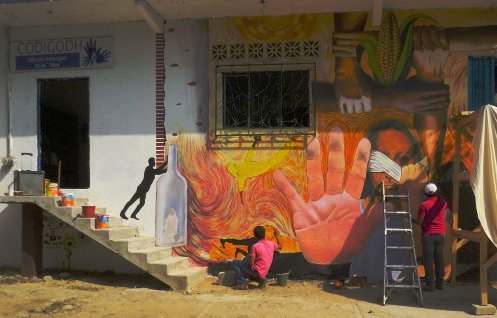 Like in many places worldwide, our office in San Pedro Amuzgos, a community located between the Costa Chica and the Southern Desert of Oaxaca, also participated and organized different events for the International Women’s Day on the 8th of March.

The first project was a mural in collaboration with the local painter Pedro Tapia Martinez who’s aim is to attract attention to the context of violence against women. The motives were developed collectively with members from the community in order to reflect about the topic of gender violence as this as well as alcoholism a widespread issue in indigenous regions.

As it’s close to the Mexican state of Guerrero, the presence of criminal groups is high which increases the violence not only but also against women. A first approach to tackle the issue of gender violence is the reflection about power structures that legitimize or omit the perpetrators.  The mural is a way to express the feelings and emotions of different participants of the project regarding this important topic and promote women’s right in the community.

The colleagues from our office in Amuzgos also collaborated in a march to commemorate the International Women’s Day in Cacahuatepec, a community on the coast of Oaxaca. People of different ages participated in this event which was another measure to grab interest in the issue of gender violence in the region.

The end result of the mural shows the parts of the community that its members are proud of as well as the issue they are still dealing with and which will be the focus of the work of Codigo DH in this region in the future.